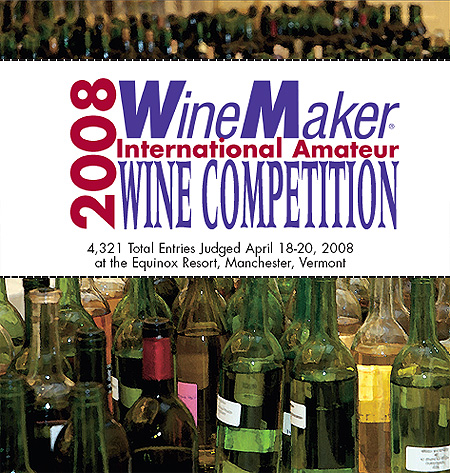 From April 18 to 20, 2008, a record total of 4,321 different wines were judged at The Equinox Resort in Manchester, Vermont. The 2008 edition of the Winemaker International Amateur Wine Competition once again represented the largest and most diverse collection of amateur wines ever assembled under one roof. In fact, this year’s competition also was the largest wine competition of any kind – commercial or amateur – in North America.

The 4,321 entries arrived from hobby winemakers living throughout North America in 48 American states and 8 Canadian provinces and as far away as Australia, Italy and Israel. Over the course of three days, experienced judging panels worked through 822 flights, examining each wine using the UC-Davis 20-point wine scale evaluating appearance, aroma, taste, aftertaste and overall impression.

The wines were entered in 50 different categories and included an astonishing array of varietals and wine styles. Kit wines competed alongside fresh-grape entries in this blind tasting. Entries were awarded gold, silver, bronze and best of show medals based on the average score given by the judging panel.