From April 16 to 18, 2010 a record total of 4,508 different wines were judged in the 2010 edition of the WineMaker International Amateur Wine Competition. 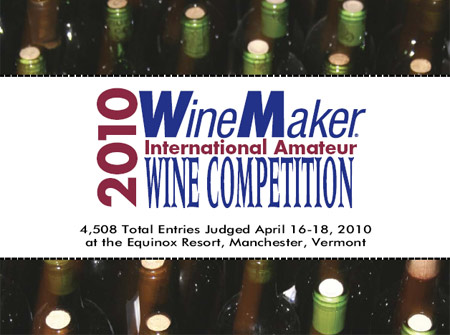 The wines were entered in 50 different categories and including an astounding array of varietals and wine styles. Kit-based wines competed alongside fresh-grape entries in this blind tasting. Entries were awarded gold, silver, bronze .

Once again this judging was the largest wine competition of its kind in the world and represented the largest and most diverse collection of hobby wines ever assembled under one roof.

The 4,508 entries arrived from hobby winemakers living throughout North America in all 50 American states and 8 Canadian provinces as well as a total of 8 different countries.